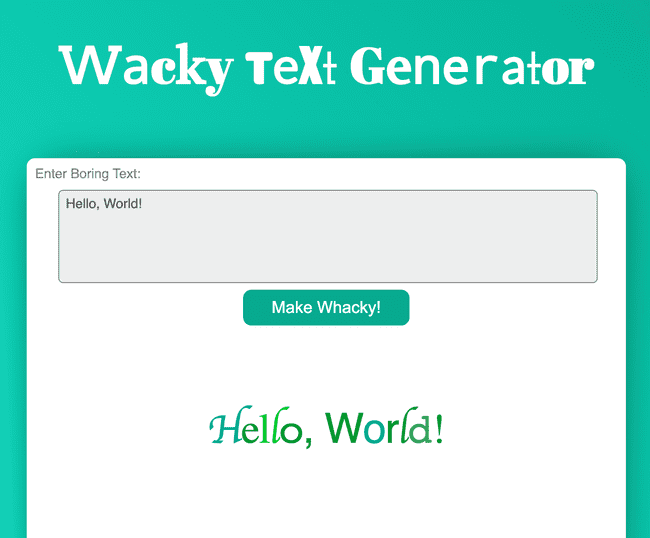 This is the writeup for a XSS challenge sponsored by Amazon and hosted by BugPoC. 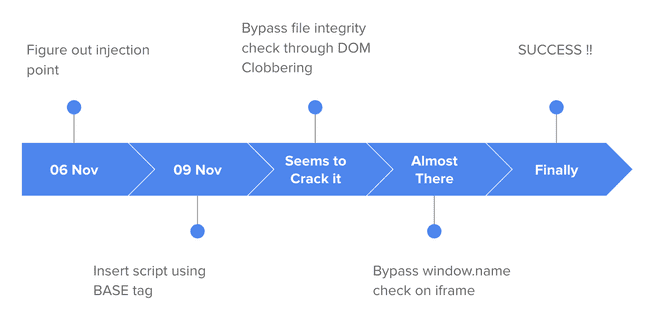 Now, since we're done with the summary let's delve into the actual nitty-gritty of this challenge and my thought process during it. I saw this tweet on 6th Nov and started looking into the challenge, by then I guess a few people had already solved this. 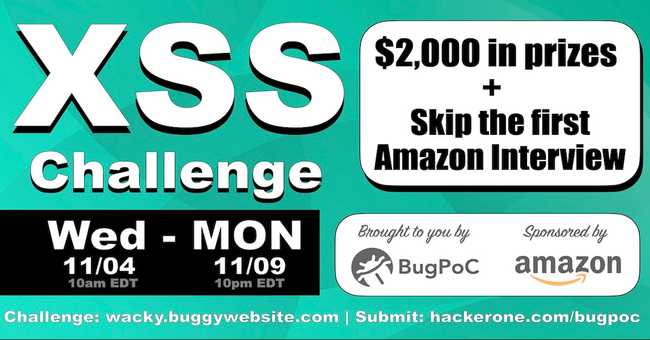 Any website that I check I start with checking it's source and then it's Elements in the Developer Window. Same goes for this. Mostly for something hidden or commented out code etc. There wasn't much except an iframe, a custom css file ( style.css ) and a js file script.js.

Fiddling with the website I realised that any input into the text box which contained &*<>% was automatically removed. On looking at the script.js file, the root cause was found.

Anything that was submitted through the input and submitted by pressing 'Make Whacky!' was reflected into the iframe with some simple styling to it. This input was passed to the frame.html as a param value.

Opening the frame.html with the param value in a new tab shows an error :

Figuring out the root cause for this, I found this in the frame.html code :

So here the window's name was compared with iframe. I made a mental note of this.

Let's get deeper - Stage I - Escaping the <title> tag

Now I hooked my browser with BURP to proxy all traffic through it. In the request I replaced the param value with URL encoded payload.

Now the title tag was escaped but the payload wasn't executed. Chrome devtools very generously pointed us into the right direction as to why the execution was blocked.

Stage I done. Now we need to work on bypassing the CSP.

The first thing I did was to evaluate the CSP using an online evaluator : csp-evaluator.withgoogle.com. It suggested that there's a High severity finding, base-uri was missing.

Missing base-uri allows the injection of base tags. They can be used to set the base URL for all relative (script) URLs to an attacker controlled domain. Can you set it to 'none' or 'self'?

What are we waiting for then 😎

I setup a local python server with CORS and then opened it for the world to access using ngrok Recreated the same directory structure :

On one of the terminal tab, I started the python server :

And on another, the ngrok client :

Now for the payload :

Yay ! Finally we bypassed the CSP and are able to load our script. So, the next hurdle was to bypass this integrity check.

SRI or Sub Resource Integrity was thwarting my attempts to load a malicious frame-analytics.js file.

Subresource Integrity (SRI) is a security feature that enables browsers to verify that resources they fetch (for example, from a CDN) are delivered without unexpected manipulation. It works by allowing you to provide a cryptographic hash that a fetched resource must match.

I dived into the code again and found the code responsible for it.

First the fileIntegrity object is defined under window scope. This contains the hash value for frame-analytics.js i.e. unzMI6SuiNZmTzoOnV4Y9yqAjtSOgiIgyrKvumYRI6E=.

And in the above line it's being set to the script element which is inserted into an iframe with 'invisible' class. So we see it's sha256 value. Thus, sha256 hash is fetched from window.fileIntegrity's value. So, if by any chance we can control that value then we can insert our hash and insert any file we want.

Well here I was totally stumped. I didn't know how to bypass this check as there's no way that two files would've the same sha256 hash and I also wasn't able to control the value being passed. Then I saw a hint from @bugpoc_official where The Thing was seen 'clobbering' .

I quickly googled 'XSS clobbering' ( as I didn't know there was a thing called DOM clobbering ) and the first article was from PortSwigger, it had everything I needed to know to bypass the file integrity check.

So, what you had to do was essentially create an object with the same id as the object in this case fileIntegrity and then when the browser tries to access the object using window.fileIntegrity it would fetch the attacker created object. And since it's controlled by the attacker you can easily insert any value into the object and thus control the sha256 hash for the file.

So, I created a new payload :

Let me explain this payload. Contents of the file frame-analytics.js are :

This sha256 is calculated using the command :

NOTE : If you're facing difficulty with openssl you can insert any value and chrome will give an error in the browser console with the actual hash value calculated, which you can then plug in.

URL encoding this payload and sending it we get this :

So we bypassed SRI as well, onto the next challenge 😌

The iframe where frame-analytics.js is being loaded from is running in a sandboxed iframe with attributes : allow-scripts allow-same-origin Since allow-modals is not set we can't create a pop-up modal.

From now on, sandboxed frames will block modal dialogs by default to prevent them from popping up confusing, modal messages to users. This includes the infamous window.alert(), window.confirm(), window.print() and window.prompt(). However if you really (really) want to allow modal dialogs inside a sandboxed frame, you can still add "allow-modals" to its "sandbox" attribute.

This was pretty straightforward, just calling the alert from the window.top would bypass this. This is the payload :

So the frame calls the top window and alert is popped from there.

However this isn't the end 😅

You might ask, how did I conclude that this isn't the solution. Well code doesn't lie. Let's look at it.

If you look at the above code, from frame.html , when the alert is called it would also call another alert with the base64 decoded value of the following :

Thus the alert we popped earlier was from the top window's context and we need to pop alert from the iframe's context.

There was a hack which I tried and it worked as well. You need to replace the frame-analytics.js code with this :

However, this wasn't the intended solution because here the victim's traffic was to be intercepted to insert the payload, which you can easily realise is not an XSS anymore.

So, we needed to find a way where just opening the link would execute the XSS.

Let's recap what we already know. Any payload passed into the param parameter in frame.html would be loaded into the iframe.

So why not directly give the victim :

This doesn't work because of a check we saw earlier i.e. window.name=='iframe'. Searching window.name XSS, I found a 2014 SO post which mentions how you can name a window :

The other way to get hold of another window is to pop it up. You can specify the window name in the second parameter:

I then checked the MDN docs which stated this

Thus we had the full exploit chain. I just needed to create a HTML file which when visited will automatically open this frame.html with our payload.

This is the contents of poc.html

Now let's see it in action 😎

Hope this was worth your time, do checkout my youtube channel : HackingSimplified

Checkout the latest video from the channel :